The console is compatible with the entirety of the original PlayStation software library and contains many of the same features, although it lacks the "Reset" button seen on the original model.

The PS one console redesign was released in Japan on July 7th, 2000, followed by overseas releases in North America and Europe during September of the same year on the 19th and 29th respectively. Impressively, during its first year on the market, it had managed to outsell all other consoles on the market at the time -- including its successor, the PlayStation 2.

The PS one and its bulkier predecessor were supported until the release of the PlayStation 3 in 2006.

A 5" LCD screen accessory was released two years after the console and was included in a "Combo Pack", though it was also available for purchase in stores separately until its eventual discontinuation in 2004. The accessory could be connected to the console's AV MULTI OUT and DC IN 7.5V ports and was fastened in place with two screws. After connecting it, all video output would display on the screen while the audio would play through the screen's speakers. The accessory was designed to allow for greater portability of the console since, at the time, Sony had not yet developed a handheld system. This can also be seen in the Combo Pack's included cigarette lighter adapter which allowed the system to be plugged into a car outlet. 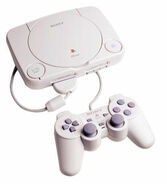 PS one with DualShock 1 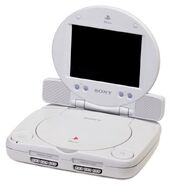 PS one with LCD screen accessory.
Community content is available under CC-BY-SA unless otherwise noted.
Advertisement