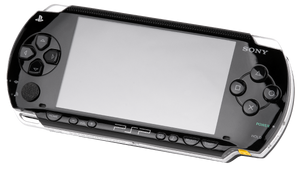 The PlayStation Portable (officially abbreviated as PSP) is a handheld game console manufactured and marketed by Sony Corporation Development of the console was announced during E3 2003, and it was unveiled on May 11, 2004, at a Sony press conference before E3 2004. The system was released in Japan on December 12, 2004, in North America on March 24, 2005, and in the PAL region on September 1, 2005.

The PSP is the only handheld video game console to use an optical disc format, Universal Media Disc (UMD), as its primary storage medium. Other distinguishing features of the console include its large viewing screen, robust multi-media capabilities, and connectivity with the PlayStation 2, PlayStation 3, other PSPs and the Internet.

Retrieved from "https://playstation.fandom.com/wiki/PlayStation_Portable?oldid=12171"
Community content is available under CC-BY-SA unless otherwise noted.